Data, data everywhere, but does it make us think?

We share our stance on the power of data, and why its so important for the future of agrifood.
posted 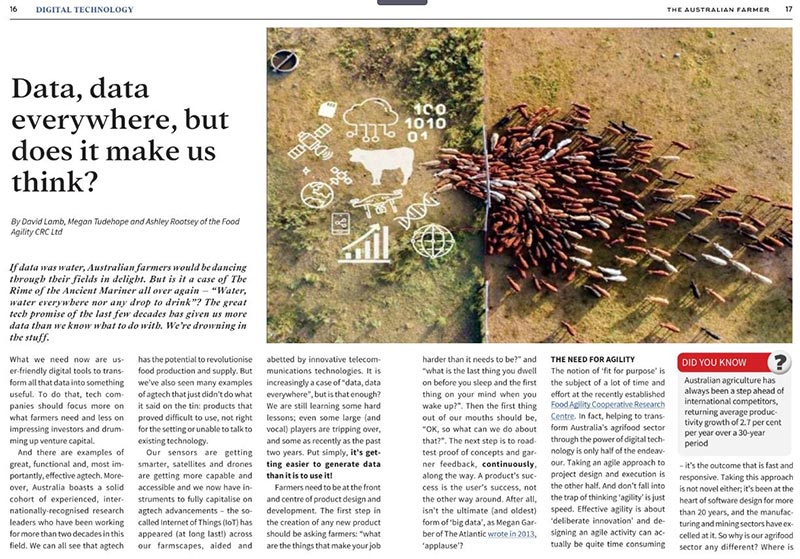 This article was written by David Lamb, Megan Tudehope and Ashley Rootsey for The Australian Farmer, Volume 2.

If data was water, Australian farmers would be dancing through their fields in delight. But is it a case of The Rime of the Ancient Mariner all over again – “Water, water everywhere nor any drop to drink”? The great tech promise of the last few decades has given us more data than we know what to do with. We’re drowning in the stuff.

What we need now are user-friendly digital tools to transform all that data into something useful. To do that, tech companies should focus more on what farmers need and less on impressing investors and drumming up venture capital.

And there are examples of great, functional and, most importantly, effective agtech. Moreover, Australia boasts a solid cohort of experienced, internationally-recognised research leaders who have been working for more than two decades in this field. We can all see that agtech has the potential to revolutionise food production and supply. But we’ve also seen many examples of agtech that just didn’t do what it said on the tin: products that proved difficult to use, not right for the setting or unable to talk to existing technology.

Our sensors are getting smarter, satellites and drones are getting more capable and accessible and we now have instruments to fully capitalise on agtech advancements – the socalled Internet of Things (IoT) has appeared (at long last!) across our farmscapes, aided and abetted by innovative telecommunications technologies. It is increasingly a case of “data, data everywhere”, but is that enough?

We are still learning some hard lessons; even some large (and vocal) players are tripping over, and some as recently as the past two years. Put simply, it’s getting easier to generate data than it is to use it!

Farmers need to be at the front and centre of product design and development. The first step in the creation of any new product should be asking farmers: “what are the things that make your job harder than it needs to be?” and “what is the last thing you dwell on before you sleep and the first thing on your mind when you wake up?”. Then the first thing out of our mouths should be, “OK, so what can we do about that?”. The next step is to road test proof of concepts and garner feedback, continuously, along the way. A product’s success is the user’s success, not the other way around. After all, isn’t the ultimate (and oldest) form of ‘big data’, as Megan Garber of The Atlantic wrote in 2013, ‘applause’?

The need for agility

The notion of ‘fit for purpose’ is the subject of a lot of time and effort at the recently established Food Agility Cooperative Research Centre. In fact, helping to transform Australia’s agrifood sector through the power of digital technology is only half of the endeavour.

Taking an agile approach to project design and execution is the other half. And don’t fall into the trap of thinking ‘agility’ is just speed. Effective agility is about ‘deliberate innovation’ and designing an agile activity can actually be quite time consuming – it’s the outcome that is fast and responsive. Taking this approach is not novel either; it’s been at the heart of software design for more than 20 years, and the manufacturing and mining sectors have excelled at it.

So why is our agrifood sector any different? Where is our agility?

Perhaps there are two reasons.

The first is that those experienced in this agile form of design in other tech sectors often lack the real-world, industry knowledge (farming is a classic example and casualty) that is necessary to migrate into the agrifood sector.

And secondly, those who have existed all their lives in the agrifood sector may have simply been slowly cooking in the ever-heating pot of ‘innovation water’ (much like the frog) and not realised we have to do things differently. It’s time to bridge the cultural divide between those that can but don’t know what, and those that need but don’t know how.

Ultimately, we are not trying to make cool technology for the sake of it. We’re trying to solve real people’s problems and make sure Australia’s agrifood industry is globally competitive and sustainable.

Where to next for AgTech?

A lot of the agtech we’ve got in the market today focuses on driving efficiency at the production level. We’ve got a way to go, but at some point in the not too distant future we’re going to hit the efficiency limit. Let’s start building agtech that recognises production as an integrated part of the supply chain.

To continue reading, please view the full article on The Australian Farmer website.

Tweets by foodagility
Learn how we work
Related Project:
Watch our videos
Subscribe to our newsletter
the latest...
News

How can data and digital help our agrifood supply chains be more resilient to the next COVID, fire, or flood?
News

Missed the launch of Mission Food for Life? Watch it here.